It feels good to be back in the Northwest! My oldest son Lucius and I really enjoy hiking, especially after exploring the mountains in Arizona – two of our favorites were the Camelback mountain which is located in the valley of Phoenix and Cathedral Rock Mountain that is located in Sedona. Sedona is famously known for their vortexes that radiate earth’s energy! Follow me on this epic journey of hiking with kids!

I was devastated to hear the news about the fire all around Multnomah Falls a couple years ago. When I saw the burnt trees in person, the impact really hit home. The good side of it, the plants were able to recover and restore some of the forest’s beauty.

When we moved back to the Northwest which was just this summer of 2019, my main hiking goal was to hike the Multnomah Falls. For some of you that have never been there, Multnomah Falls is a waterfall located on Multnomah Creek in the Columbia River Gorge. It is about 30 miles East of Portland.

Not only is Multnomah Falls one of the most visited, beautiful, and iconic hiking spots in Oregon, it is also the place that my husband Adam and I got married. We were married in 2008 on Cinco De Mayo to be exact. I don’t know what those two wild 22 year-olds were thinking at that time, picking a busy Holiday to get married on. I guess we really wanted to party on our anniversary every year but we still don’t hold our breath for Mexican restaurant reservations.

We have visited the falls many times throughout the years but when we do come, it would be on a weekend. Why do we come during the busiest time? Due to our previous experiences, Lucius and I got here on Saturday early around 6 am. Is this for reals? Only 5 cars in the parking lot? It felt like I was in the first in line at an amusement park getting ready to ride my favorite ride. Who else gets excited about this kind of stuff?

After parking the car, getting a few photographs and going under the bridge toward the falls, the path took us right in front of the Multnomah Falls Lodge. As we got there super early, no one was in front of the building which made the lodge even more magnificent than before. One of the things that I did not know about the lodge was that it doesn’t offer lodging but a restaurant that offers an upscale, Northwest style cuisine with fresh and local ingredients. The Historic Lodge includes a restaurant, gift shop, snack bar, expresso bar and interpretive center. This lodge was completed in 1925 and now owned by The City of Portland.

Right behind the lodge is the Multnomah Falls. When you get to the platform right in front of the falls, you can find a bridge up top that goes across the lower falls. The bridge was constructed in 1914. The round platform at the bottom of the falls, oh how it reminds me of the day I said, I do! This is the exact spot that Adam and I were wed. Permanently embedded in my head was anything except for the wedding vows the Officiant had us recite. I was too focused on the sound of people chattering in the background, and the sound of the waterfalls hitting the base from 620 ft. high up. The beauty of it will definitely distract you. It distracted me.

After a quick observation of the falls, Lucius and I started heading up toward the famous bridge- The Benson Bridge. Then our hike had begun. This Multnomah-Wahkeena loop hike is about 5 miles long and gains roughly 1600 ft. in elevation. Suppose to be a moderate hike, depending on your physicality. For us, the hike was somewhat rigorous as we hadn’t prepared for it. When you get to the top of the falls, you can view the crest from the platform called, Multnomah Falls Overlook. This is a short 1 mile hike up to the top from the falls. You can either go back down where you started or continue on toward the Wahkeena Falls, which is the end of the Multnomah-Wahkeena Loop Hike.

We continued the dirt path to the two waterfalls that were about 0.5 miles apart from each other. Weisendanger Falls and Ecola Falls. About half way into the loop, you will get a chance to visit Devil’s Rest Viewpoint and Angel’s Rest (double check on the trail names). Lucius and I were both exhausted and we decided to skip it. By the way, later found out that these viewpoints were both popular site seeing areas of the Columbia River. (Sigh) Next time.

After 4 hours into our trip, we finally reached the Wahkeena Falls. We were so happy that we reached the end… wait… nope… that was the end of the Multnomah-Wahkeena trail BUT since we parked at the other end of the loop, it wasn’t over yet! LMAO! We had to take another trail (very short) that took us back to Multnomah falls, it was an icing on the cake!

Overall, we had an amazing time. #AD However, it had rained here the night before which caused some parts of the rocky trails to be a bit slippery. As I’m still gearing up to hike more often in the Pacific  Northwest, I was without proper hiking boots. But, thankfully my son had just gotten his boots from NorthsideUSA, he was able to have a fantastic time on the trail. While it was slippery for me, he handled the terrain pretty well. These boots were waterproof and even after falling into a stream, his feet stayed nice and dry. I highly recommend these boots for anyone! Thanks to NorthsideUSA, they were generous enough to give me a code for 10% off to share with anyone who’s interested. Go to NorthsideUSA and put in the code: ExploreMorePNW and gear up for Fall and Winter!

Okay, where to next? Comment below and let me know if you know some good hiking spots! Thanks for reading my post!

This site uses Akismet to reduce spam. Learn how your comment data is processed. 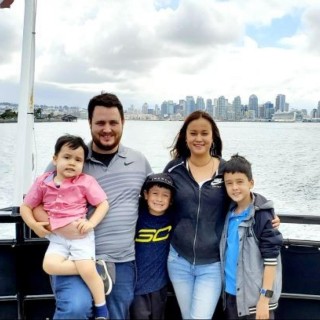 Hello! We're a family of 5 who likes to travel and explore! Explore More PNW is about traveling with family in the Pacific Northwest- camping, hiking, and being outdoorsy. I will occasionally blog about my favorite recipes, kid friendly activities around Portland, restaurant reviews, and more!